This past week we had a visit from a post-doctorate researcher at Exeter University, Dr Kate Kanne, who is working on the Warhorse Project. This is three-year project, launching in February 2020, conducting the first ever systematic study of the full range of archaeological evidence for warhorses, and horses more generally, from medieval Britain. For more information on this fascinating project, follow this link and check out the brilliant work they have been doing https://medievalwarhorse.exeter.ac.uk/). Dr Kanne knew about the horse bones found at the Trowbridge Castle dig site, from just outside the Home Mills building in the 1980’s, from other academic papers and was very interested to examine the bones and take samples for testing.

Previous research had suggested that there may have been an unusually large horse found on the site dating to the early Norman period. Horses of this time were much smaller than they are now in Britain, standing at around 13.2 hands and it wasn’t until the beginning of the Tudor period did horse size increase to 14+ hands. The individual found at Trowbridge Castle is estimated to be around 15.2 hands tall – a much bigger individual than expected! This could suggest that there was trade in horses from the Near East earlier than was previously thought. We know that trade in larger horse stock with Spain began in the 13th Century but if this individual pre-dates that it could be very import to our understanding of the the development of the medieval warhorse. The site had an excellent assemblage of bones from a wide variety of animals, with fairly good preservation, but there were a few oddities. In many cases the horse bones were found scattered amongst the graves of humans. From a European site in this period this wouldn’t be too unusual but in England it is not the norm to bury humans and horses together on this scale.

Trowbridge Castle was likely a motte and bailey castle built some time in the early 1100’s, though the first written records of the castle don’t appear until 1139 when the castle was under siege. We don’t know exactly  when the castle became defunct but we know by the 14th century it was no longer in use as a fort and by 1540 it was a ruin. Below is a picture from ‘Excavations in Trowbridge, Wiltshire, 1977 and 1986-1988,’ by Alan H Graham and Susan M Davies, Wessex Archaeology,1993, which shows an approximate outline of how the castle was situated in the town. If you are interested in learning more about the dig this book is available to read in our Research Library which be opening in spring 2022.

For the purpose of this research Dr Kanne was looking for some very specific horse bones in our assemblage, the metapodials, the astragalus, the calcaneus and any teeth available. Long bones (humerus, radius, ulna, tibia and fibula) would be helpful to indicate size but are less helpful in showing where the individual originated. For those of you who are unfamiliar with horse anatomy here is a quick lesson: Metapodial is the umbrella term for the bones in the hands (metacarpals) and feet (metatarsals) in humans or the equivalent in animals. For quadrupeds like horses with no real anatomical difference to define a hand or a foot, metapodial is the term used. The astragulus (or tarsus bone in humans) and the calcaneus are two of the bones which form the ankle, in horses the true ankle is actually what we would think of as there knee if we were to look at a horse.

We found lots of teeth perfect for isotope analysis and DNA tests to help determine where the horses originated from. Isotope analysis can tell you where a horse lived  in its younger years and this is vital to telling us whether the horses on the site came from local sources or if they came from abroad. Lots of ‘baby’ teeth were found which suggests that it is likely horses were bred on site as well as horses being brought in as adults. We also found an abundance of astragulus bones which will undergo geomorphometric analysis to help determine the size of the horse. We found no calcanei and only one metapodial which was a disappointment but still  gave Dr Kanne lots to work with. We found a few very interesting bones though, including a truly mammoth phalanx (the equivalent of the small bones of the finger). The picture below shows a normal sized phalanx at the bottom and this large phalanx on the top.

Dr Kanne was kind enough to do a little maths for us before she left and she aged one of the teeth and revealed that the horse it belonged to was likely around the age of 9-10 at the the time of its death. The bones are being sent for analysis as soon as possible and we will be getting results in the coming months. This project is very exciting and we will be keeping a close watch on the results being published. Dr Kanne has agreed to a virtual meeting later in the year where she will tell us all about the results of the tests on our bones and we will eager to share this with you. 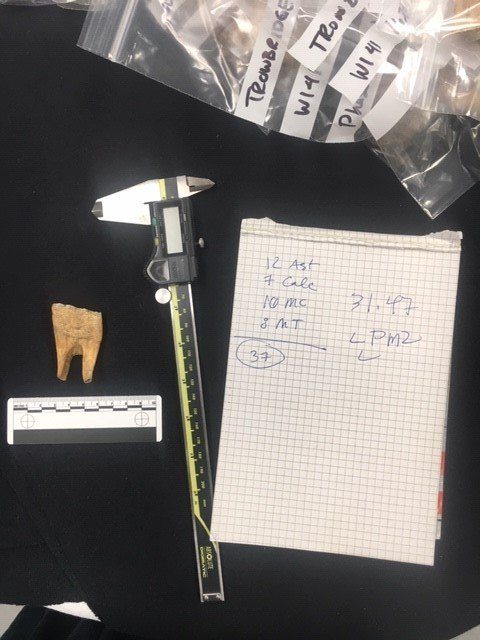