Our fourth Object Highlight comes to you from Andrea our Museum Retail and Income Generation Officer . For her first item she has chosen a collection of posters by the artist Edwin F Harris circa 1960’s and 70’s.

During the refurbishment and expansion work on the museum building, all of the collection was boxed up and moved to a secure location to keep it safe. When the work finished the collection came back and every box had to be opened and each item checked to ensure the contents matched the entry description on the database and to assess the objects condition.

This was a huge task that involved all the team. We worked through the boxes systematically, so you never knew what you’d see each time you lifted the lid! One day I pulled out a large flat box toexamine, it was full of the most extraordinary art work, depicting scenes of injustice and cruelty towards animals, often referencing quotes from the bible. What struck me was the passion and care the artist had taken to make his point, often reversing scenarios, for example anthropomorphising the animals as dressed figures of authority or as the huntsmen in pursuit of the humans. 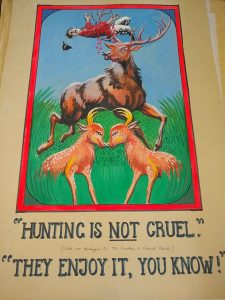 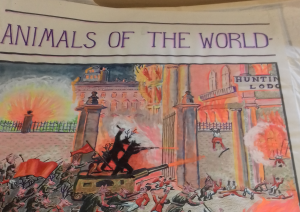 There are dozens of images, and each of these artworks encapsulate a whole story, which draws the viewer in to look at the smallest details. Often drawn and painted on lining paper, the designs are made the size of A2 posters. We don’t know very much about the artist, Edwin F Harris, we can see that he liked to use a range of medium, (maybe just what he had to hand) including poster paint, pastels, pencil, watercolour, most are dated between the late 1960’s and 1970’s, and were donated to the museum in the mid 1980’s. 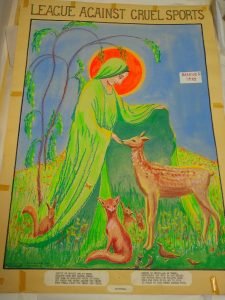 Many of his posters carry the Oxfam symbol and also reference the league Against Cruel Sports and the RSPCA.  They were made to be viewed and to raise awareness about issues he clearly felt very strongly about. It would appear that some of the posters were banned and not allowed to be displayed, as some of them have this written over them. We can tell that they have been used as they are studded at the edges with pin holes and cello tape.

I like them because they were clearly made by someone who cared deeply about the suffering of sentient beings and injustice, topics that are just as relevant today as ever they were, and Edwin Harris will surely have helped make the viewers of his work take note and think about these issues. Change happens slowly.’ 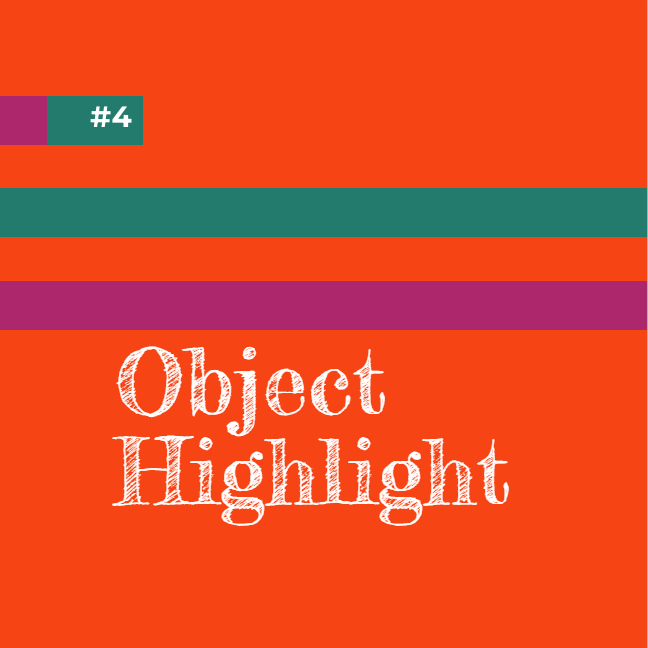